There’s something magical about whales that just isn’t evident in other sea creatures. Whether it’s their sheer size, their apparent sensitivity, or their actions, whales can be both fascinating and perplexing. Why do whales do what they do? What dictates whale behavior? No one has all of the answers, but we can give you a glimpse into the world of whales.

Among the most magical whale behavior, and certainly something every explorer wants to see. Breaching is when a whale throws its whole body out of the ocean and into the air. The largest whales need to swim directly up in the water at a 90-degree angle to accomplish this. Others swim along the surface, gain speed, and then breach.

What does it mean? The most popular whale behavior we witness is still a mystery. But there are many theories, including:

Still, others think that whales may just be having fun when they breach the water.

Tail slapping refers to when a whale slaps its tail on the surface of the water. This is more common in smaller whales but not exclusive to them.

What does it mean? There are a few reasons a whale tail slaps. It could be for communication, as a sign of aggression, or it could be a useful tool to help forage for food.

Those who are lucky enough to witness smaller whales, such as porpoises, will be thrilled by this behavior. This is where the whale swims at high speeds along the surface of the water, and frequently jumps out.

What does it mean? The most common reason to see small whales performing porpoising is as an escape behavior. They may be escaping sharks or trying to get out of the way of boats. The long jump into the air is the best way for them to get the oxygen they need to swim that fast.

While primarily a means of escape, these fast surface jumps may also be for play, communicating, removing parasites or barnacles from the skin, or looking for the visual cues of prey, like birds circling schools of fish.

Spyhopping is where a whale sits upright in the 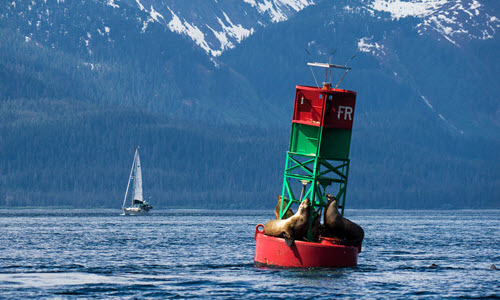 water, such that a top portion of its body is popping out. The whale does not need to swim to do this. Instead, they rely on their buoyancy and simply use their fins to keep themselves in place. They can stay floating like this for minutes.

What does it mean? They could be looking at you! Whales who spyhop are commonly looking at whale watchers. Or orcas may spyhop to look at prey, like sea lions on the ice. Grey whales are more likely to spyhop in order to hear and not look.

When you book with Above & Beyond Alaska (ABAK) Wilderness Adventures to show you the secret world of whales and their unique behaviors, you can feel confident that you’ll be in for the experience of a lifetime. We have been creating exciting wildlife adventures in the Juneau, Alaska area since 2002, and we can’t wait to do the same for you.

Above & Beyond Alaska, LLC is a local, employee-owned guiding company based in Juneau Alaska. We have been exploring the region from ocean to ice for over 25 years and guiding others since 2002. Our goal is to provide a complete Alaskan wilderness experience by sharing with clients our passion for the outdoors, technical know-how, and natural history knowledge.